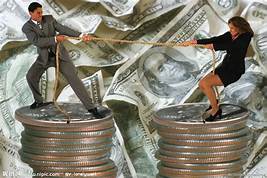 I worked as a Financial Neutral on a collaborative divorce case several years ago involving a high-earning wife and low-earning husband (we’ll call them Louise and Roger.) Roger acknowledges that he could be earning more if he went into sales, which he is good at, but it gives him no joy in life. Instead, he chose to teach and earn about half of what a sales job would bring in. This life choice has caused a rift in the marriage, leading to the divorce.

In this situation Louise will be paying alimony for some years, but there are not enough investment assets to supplement Roger’s low income when alimony runs out. The financial projections provided I provided project that Roger will run out of assets at about age 75. After that Roger will be living on Social Security. It is quite possible that he’ll end up in low-income housing. Roger’s attorney asked me if we should be bringing this scenario up in the next collaborative team meeting.

Louise has stated that, while she is willing to help support Roger for a few years, it is up to him to manage his life after that. Roger agrees, but his attorney is not sure he understands the long-term situation. She wonders if we should discuss with Roger the possibility that he may end up destitute in his old age?

Giving bad news to a client is never easy, but it may be helpful. The situation above is not uncommon if you switch the genders – how often have you had a wife who is reluctant to go back to work even though it looks like she’ll have to? Sometimes there is nothing you can do to settle the case that will help the situation unless your client is willing to change things on their end, so it is important that the reality of this person’s new life post-divorce be presented.

Financial Neutrals are usually adept at having this conversation. We can use graphs or tables, depending on what resonates better with the client, to show them the projected future. It is true that “a picture is worth a thousand words” and seeing a graphic representation of their financial future may be the wake-up call that some people need. We often work with individuals to talk about options for improving their financial circumstances. We may talk about working beyond their expected retirement age, ways to increase their earnings or their ability to reduce expenses. Often the person knows the severity of the situation but doesn’t want to face it.

As part of Roger and Louise’s collaborative team my role included starting the conversation of how best to support Roger. By showing the team my projections of his future income and expenses it was evident to Roger that he needed to focus on increasing his income so that he could support himself throughout his retirement. In the end Louise agreed to support Roger for 3 years until he accomplished his goal of finding a higher-paying teaching job.

These conversations are not always easy and can be especially difficult in the context of a divorce when the client is already dealing with a life-changing event. The Financial Neutral’s goal is to be non-judgmental, but realistic, and help the parties as much as possible to have a better future. Instead of ignoring the possibility that a client may run out of money, we can perhaps help change the trajectory of their future by introducing this discussion and reviewing projected outcomes.

Can you Resolve a Case Outside of Court?

I Asked for a Divorce, Now What?

Prenups Can be the Answer

Look Forward by Looking Back

The Difference Between Collaborative Divorce and Mediation